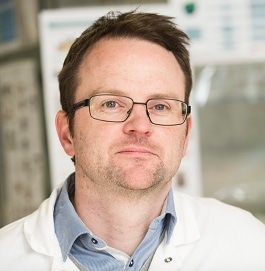 Darragh Duffy, Ph.D., is the Scientific Manager of the LabEx Milieu Interieur project at the Institut Pasteur in Paris, France. This ambitious program started in 2011 with the mission to understand the genetic and environmental contributions to healthy immune responses and then apply these findings to disease settings to understand the differences in the immune response between populations. Stage 1 of the program laid the scientific foundation for this far-reaching, four-part population study.

Stage 2 began in 2012 and required recruiting 1,000 volunteers from ages 20-70 willing to donate whole blood samples, fecal samples, nasal swabs, and punch biopsies to create the extensive sample bank. The whole blood samples were assessed by baseline immunologic phenotyping and subjected to immune stimulation. These DNA samples were isolated, sequenced, and analyzed. Fecal samples and nasal swabs were used in the metagenetic studies to understand the contributions of the microbiome. Finally, primary fibroblast cell lines were created using the punch biopsies; these have been essential in the mechanistic studies of Stage 3. We spoke with Dr. Duffy about the progress of the project to date and his expectations for the work to come.

NanoString (NS): What was the inspiration for this project?

Darragh Duffy (DD): The Milieu Interieur project is the brainchild of Matthew Albert, an immunologist, and Lluis Quintana-Murci, a human population geneticist. They were exchanging ideas over lunch, sharing their thoughts and experiences. The result was a shared vision to understand how evolution has shaped our immune response. It started with a paper where the Quintana-Murci lab re-sequenced Toll-like receptors (TLR) in the human genome and saw that TLRs were under different types of evolutionary selection. TLRs expressed inside cells that recognize viruses have very few mutations. Clearly these are so important to the immune response that there’s no room for mutations—the cost to survival would be too high. In contrast, some TLRs that are expressed on the cell surface that recognize bacterial or bacterial components like flagellin have a lot more mutations. This indicates that they are under less selective evolutionary pressure, and their diversity may be beneficial to survival. Immunologists have not always appreciated the full value of evolutionary pressure and how it has shaped differences in the immune responses of populations and individuals. Dr. Albert’s background as an immunologist and clinical pathologist gave him the insight that robust, reproducible, standardized assays were needed to optimize the statistical data required to study populations on a larger scale. Dr. Quintana-Murci’s background in health and genetics enables him focus in on health at the baseline without the disease factor(s) that can be distracting to immunologists.

NS: One of the primary goals of the Milieu Interieur project is to understand the heterogeneity of the normal human immune response. With Stage 2 nearing completion, what have you learned so far?

DD: For starters, translational research takes a lot longer than you think. Regulatory and ethical approval are becoming more and more complicated, especially in France and the rest of Europe. It took a lot of time and effort to make sure we had the protocols approved just to get started but it has certainly been worth it. We already knew that immune responses are highly heterogeneous but now we can demonstrate that in a whole new light. What’s striking is how much variability remains to be explained even after controlling for age, sex, smoking, latent viral infection, and genetics at the baseline level. We’ll be able to tackle these questions in the coming years at the epigenetic level using whole genome sequencing and through exploring the microbiome. Based on what we learn, we’ll then need to recruit new and different cohorts and conduct longitudinal studies of these individuals. We hadn’t accounted for this in our original project plan and cohort selection; it only became clear because of our early successes.

NS: How will understanding the healthy immune response help with disease research, and are there any particular diseases that will benefit more from this type of research?

DD: There’s no obvious answer to that. A lot of people immediately think of autoimmune diseases because these diseases have major perturbations in the immune responses. I tend to think more along the lines of infection, tuberculosis (TB) in particular. To a certain extent, this approach is already in use as the TB test stimulates the immune system for diagnosis and identification of biomarkers. We thought a standardized approach for stimulating and studying the immune response was needed. We’ve extended the study beyond looking just at the interferon-gamma response to doing larger, induced proteomic profiling as well as transcriptome analysis. Other teams have studied these responses at their baseline but not necessarily after stimulation. We are learning a lot by comparing the data back to its original healthy population.

NS: With this approach of comparing the healthy sample to itself after an immune response, do you see a potential application for immuno-oncology and cancer research?

DD: Yes, this is an interesting area especially with the advances of using immunotherapies as treatment. Frequently this approach is used when studying autoimmune diseases to model induced immune responses and then target them with different therapies. But because we all have different immune responses how do we know to dose these immunotherapies appropriately to the individual? We are starting some collaborations to understand the induced immune response and create a readout for tailoring immunotherapeutic strategies. These drugs are usually very strong and can have a lot of adverse side effects. Knowing where an individual’s baseline immune response is could really help in determining the dosage or combination of therapies.

NS: Part of your project includes understanding the impact the microbiome has on regulating the immune response. These two subjects are so diverse—how do you link them?

DD: We’re still in the early stages of making those connections. We’ve completed sequencing the fecal samples and nasal swabs. We’re now integrating those data sets with our case report variables. It’s still early days in terms of integrating that information with immune phenotypes. There’s no standard method for establishing associations and correlations between these two highly variable components. We do have the advantage of stimulating the whole cell blood samples with known bacterial species. This lets us ask specific questions such as how the presence or absence of lactobacillus would influence induced immune response. We will need to ask a lot of targeted questions like this to draw out any patterns from the heterogeneous sample pool.

NS: Since this program started in France, similar programs have been launched around the world. Are there plans to collaborate and begin studying other geographical populations?

DD: The Institut Pasteur is a global network of 32 institutes and about two years ago we launched an initiative called the Healthy Human Global Project to extend this study around the world. There is a lot of interest in this work; currently we have a pilot study underway in Senegal with the Institut in Dakar. We are working to recruit 50 healthy donors from two villages in Senegal. We’ll start with a smaller scale analysis, but the goals are the same. We’re also having conversations with the Institutes in Hong Kong and Beijing. Conversations with other collaborators are still in the early stages but of course we’re happy to talk to other interested groups.

NS: With all the data you are generating are there plans to create shared public databases?

DD: We do have plans to do that but there are a lot of legal and regulatory complications with sharing data, especially when it comes to patient privacy. Wherever possible we put links in our publications to the databases that can be accessed by other researchers.

NS: What led you to begin working with NanoString®?

DD: We tested several different techniques and compared how well they worked for our samples. We use a standard, whole cell blood stimulation called TruCulture® for our samples. It includes Heparin to prevent clotting during incubation which tends to interfere with reverse transcriptase in conventional PCR-based approaches. We also have a lot of red blood cells and therefore a lot of globin RNA which can also interfere with and overwhelm sequencing approaches. Given these technical challenges we were very pleased to find that the NanoString technology let us have high throughput, reproducible results regardless of our sample preparation protocol. In addition, the NanoString* gene expression panels feature key immune response genes important to our study. We don’t waste time focusing on genes that won’t be induced and it lends confidence to our statistical analysis. Strong statistical data is imperative in studies of this type, especially as we get into smaller, more specialized cohorts, such as juvenile arthritis. We can see statistically robust differences even when the n is as low as 3-5 samples. That is largely due to the reproducibility of the stimulation, the readouts, and the targeted approach of NanoString’s curated gene panels.

NS: What are you hoping to learn as you move into the next phase?

DD: I am looking forward to integrating all these layers of information, so we can understand why individual immune responses are different. From there we can potentially translate them into real clinical applications specific to the individual.

To hear more from Dr. Duffy, register now for our webinar on October 17th, “Understanding variability in induced immune responses”

*FOR RESEARCH USE ONLY. Not for use in diagnostic procedures.

Post by NanoString
LinkedInTweetFacebook
Previous Q&A with Dr. Stefan Prokop – Alzheimer’s: From the Amyloid Hypothesis to the Cellular Phase and Beyond NanoString / October 2, 2018 Next The Votes Are In- What Causes qPCR and RNA-Seq Variability? NanoString / November 7, 2018